Puerto Rico enjoys a warm, tropical climate. With little variation in temperature throughout the year, the mercury never seems to stray far from 85°F (29°C). Due to certain winds, the temperature in the south is usually a few degrees higher than the north, and temperatures in the central interior mountains are typically cooler than the rest of the island.

The hurricane season is between June and November, with the island being subject to severe tropical storms once in about every five years. There's little need to fret as the movement of major cyclones is tracked and can be predicted in advance That said, it's best to be overprepared rather than underprepared for a storm of this magnitude. In case such a storm does occur, it's always a good idea to ensure access to non-perishable food, a few bottles of water and, if possible, a back-up generator.

The dry season is typically from December to March but short showers can be expected throughout the year. This is generally a pleasant period with plenty of sunny beach days. 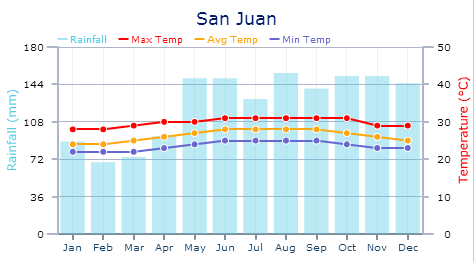 Are you an expat living in Puerto Rico?

Expat Arrivals is looking for locals to contribute to this guide, and answer forum questions from others planning their move to Puerto Rico. Please contact us if you'd like to contribute.