Bulgaria has a temperate continental climate typical of Central Europe. However, its coastline along the Black Sea has a Mediterranean climate. The weather is moderate and the seasons are distinct, with a long, hot summer and a relatively mild winter.

Springtime may be foggy and unpredictable in early March. Temperatures become warmer by June, rising to about 70°F (20°C). However, the high altitude mountain areas remain snowy well into July, when the summer heat arrives.

Summer in Bulgaria starts in June and finishes towards the middle of September. Temperatures hover around 77°F (25°C) but can rise to 104°F (40°C) on a sunny and clear day. While the interior of Bulgaria can be very hot, the coastal areas offer a refreshing breeze and comfortable 70°F (20°C) averages. Expats should note that violent summer thunderstorms and dangerous hailstorms can occur on occasion.

Temperatures don't often drop below 50°F (10°C) during the short autumn from mid-September to October.  While rainfall increases, it is dry compared to the rest of Europe. As the season progresses, winter will bring more snow than rain.

Winter lasts from late October through to mid-March and offers great skiing opportunities because of the abundant snowfall. Expats can expect temperatures as low as 23°F (-5°C) or 5°F (-15°C) in the coldest regions. However, it is often clear and sunny, softening the effect of the biting cold and making the thick snow enjoyable.

There have been several devastating floods in this region of Europe. While flooding is infrequent, violent storms and heavy snowfall are common and should be considered as a part of the climate. 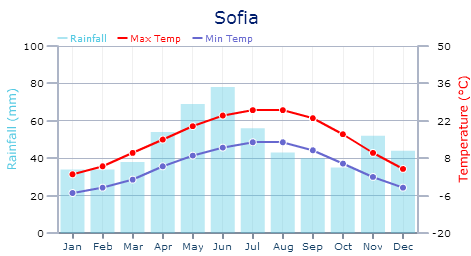 ►Read Accommodation in Bulgaria to learn more about the housing market

Are you an expat living in Bulgaria?

Expat Arrivals is looking for locals to contribute to this guide, and answer forum questions from others planning their move to Bulgaria. Please contact us if you'd like to contribute.