The weather in Oman sees temperatures and humidity generally high throughout the country all year round. May to September are the hottest months, with temperatures easily reaching up to 129ºF (54°C). The cooler months of November to March see temperatures averaging higher than 68ºF (20°C). The heat leaves expats at risk of heat stroke and exhaustion and sensible precautions are advised.

The south coast experiences its rainy season between June and September, and in the Jabal Akhdar and lowlands of the north, rain can fall at any time of the year.

Oman is occasionally affected by tropical cyclones. These storm systems, which originate over the Arabian Sea, typically dump high amounts of rain on the country, which can result in severe flash flooding.

Weather in Oman is often unaccounted for as a hardship factor, and expats should keep this element in mind when negotiating an employment contract. 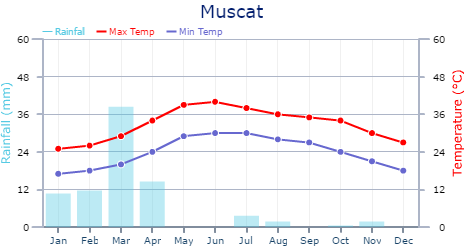 Are you an expat living in Oman?

Expat Arrivals is looking for locals to contribute to this guide, and answer forum questions from others planning their move to Oman. Please contact us if you'd like to contribute.