Keeping in Touch in Israel

Israel is a highly developed country with advanced communication infrastructure. New arrivals in Israel will find that all services required for keeping in touch, both domestically and abroad, are easily available at reasonable prices.

The internet in Israel is usually both fast and reliable. There are many public Wi-Fi areas (such as coffee houses and hotels) for those using their own laptop.

Expats in Israel won't need landlines for internet access. Nevertheless, home internet connections are usually something a tenant will have to organise themselves, and they are not automatically included in the rent.

Social networks such as Facebook and Twitter, as well as LinkedIn, are widely used with no restrictions or censorship.

Communication by landline is very efficient and inexpensive. Prices vary according to different packages and the length of the phone call.

Most of the same companies that provide internet services also provide packages for international calling. Prices vary slightly from company to company; however, due to competition, prices are generally reasonable.

Mobile phones are the preferred form of communication in Israel. Many residents only use their mobile phones and do not have landlines.

Major companies providing mobile phone services in Israel include Cellcom, HOT, Pelephone and Golan Telecom. Each company offers its own packages and deals. Expats should be able to find a package that suits their needs.

There are also pay-as-you-go options, whereby one can load credit onto a SIM card without having to commit to a contract.

The Israeli postal service is both efficient and reliable, with many branches throughout the country. The post office provides a wide variety of services in addition to mailing letters and packages. Post offices in Israel provide services that include banking, currency exchange and Western Union transfers.

There are a number of providers of cable television in Israel, each providing different types of packages. Many series and films on Israeli television are in English. They usually have Hebrew subtitles but aren't dubbed, so English-speaking viewers can see them in their original form.

The most convenient access to news is through the internet. News is broadcast in English on the radio and television at specific times of the day.

Two English newspapers are published in Israel, The Jerusalem Post and Haaretz, both of which are available online and in print.

►For information about getting around the country, see Transport and Driving in Israel

Are you an expat living in Israel?

Expat Arrivals is looking for locals to contribute to this guide, and answer forum questions from others planning their move to Israel. Please contact us if you'd like to contribute. 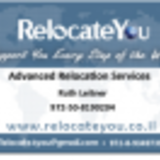 Relocate You Our Expat Expert

Ruth Leitner, CEO of RelocateYou, has rich personal experience with the process of relocation.

In different periods of her life, she experienced the complex and unique adventure of relocation in several places in the world. She experienced the excitement, the difficulties, the fears and the challenges involved in adjusting to a totally new place and way of life. As a result of this experience, she understands the importance of professional guidance and support, every step of the way in order to ensure a smooth transition and integration.

This vision became reality with the creation of the boutique relocation company:, RelocateYou. Ruth initiated this company based on the belief that the complex transition to a new country can become a positive challenging experience, accompanied by professional guidance and support for you and your family.

Ruth brings to this venture over 30 years of experience in management, employment and education. During the decades of her professional career, she created and developed national programs, trained and supervised workers, conducted negotiations, and presented in international conferences. She created collaborations with national organizations, large companies, and government offices while working with a wide variety of mental health professionals, employers, and government agencies as well as providing direct services for both clients and their families.

Ruth's professional and personal experience combined with her many organizational and creative skills are the right match for every relocation need, throughout all stages of the process, even for difficult problems requiring solutions "outside the box".