Angola has a typically tropical climate, with a short wet season and a longer dry season. Conditions across the country remain relatively uniform, but a few natural phenomena do make for some peculiarities.

Weather in Angola's coastal region is uncharacteristically dry due to the presence of the cool Benguela sea current. The region is largely desert or semi-desert as far north as Luanda. The south is especially arid on account of its proximity to the Kalahari Desert. Expats used to lush, leafy coastlines should expect otherwise.

The climate in Luanda, where most expats are located, is mildly tropical with temperatures remaining between 70°F (20°C) and 85°F (30°C) for most of the year. The so-called winter months, June, July and August, only inspire small dips in the thermometer, and expats will find temperatures quite pleasant.

On the flip side, weather in Luanda during February, March and April can be more difficult to bear. Temperatures are higher and humidity increases. Furthermore, heavy rainfall in March, and especially in April, can exasperate life in the capital city and can even damage basic infrastructure and affect road safety. 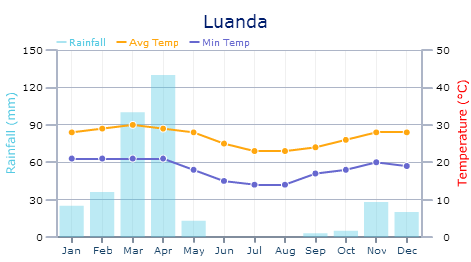 Are you an expat living in Angola?

Expat Arrivals is looking for locals to contribute to this guide, and answer forum questions from others planning their move to Angola. Please contact us if you'd like to contribute.