Pros and Cons of Moving to Japan

The East Asian island nation of Japan has a booming economy and a thriving expat community. While it presents a fascinating juxtaposition of modernity and ancient traditions, the culture shock can be difficult for new expats to overcome. Here's a summary of some of the pros and cons of moving to Japan.

Pros of moving to Japan

Everything from public transport to staying in touch runs very smoothly in Japan. Whether it’s the bullet train or a streetlight, nothing is ever broken. And if it is, a small team will quickly turn up to fix it. Almost everyone has a smartphone. Internet enters most homes via super high-speed fibre optic. Even after the earthquake of March 2011, the networks were still up and running. Nothing ever seems to break.

+ PRO: The best food in the world

Eating out in Japan is a dream come true. Famously Tokyo has had more Michelin stars awarded than Paris. However, Japan isn’t just about sushi. It has a myriad of different dishes to offer at a range of prices from budget to bank-breaking. Kobe beef is literally melt-in-the-mouth, whereas tonkatsu (breaded, deep-fried pork cutlet) will be familiar but refreshing. Teppanyaki (a style of Japanese cuisine that uses an iron griddle to cook food) will set diners back a small fortune but yaki-niku (grilled meat) will cost next to nothing.

+ PRO: The bilingual button on the TV

Many Japanese TVs receive broadcasts in both Japanese and English. The default audio is Japanese, but there’s a button on the remote control that switches non-Japanese broadcasts (such as movies and overseas news channels) to English. It may take some time to find, and every time you change channel it defaults back to Japanese, but at least the option is there.

Cons of moving to Japan

The language barrier in Japan is an unfortunate reality. Japanese people use Japanese. Don’t expect many to have more than a basic smattering of English and even less of any other language. The written alphabet uses three different character sets, none of which will be familiar (however if you read Chinese you’ll have some idea). From car navigation systems to buttons on microwaves, it will all be unreadable.

For the typical expat from Europe or America, the time zone difference to Japan is about as hard as it can be. Eight hours between London or California and 11 hours to New York can make work schedules problematic. Organising Skype sessions with family back home is something to be planned rather than a spontaneous chat.

► Learn more about housing options in Accommodation in Japan

Are you an expat living in Japan?

Expat Arrivals is looking for locals to contribute to this guide, and answer forum questions from others planning their move to Japan. Please contact us if you'd like to contribute. 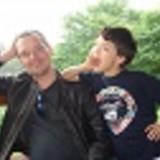 When Jonathan Hewitt was sent to Tokyo, Japan, by his UK company, he thought of it as a two-year adventure in a foreign country. More than 20 years later, he still calls Tokyo home and even runs a blog to help other expats settle into their new homes.