Expats will find the weather in Zurich to be slightly milder than in other cities of the country, but still relatively continental.

The city enjoys four distinct seasons, with rainfall present throughout. Winters are cold, and expats will need to make sure that they bring enough warm clothes to see them through temperatures known to hover between 14°F (-10°C) and 41°F (5°C). A good pair of shoes, thermal underwear and a dependable hat and scarf are crucial.

On the other hand, the summers in Zurich are normally gloriously warm and sunny. In July, temperatures of between 59°F (15°C) and 86°F (30°C) are the norm; however, due to climate change, some summers may be more hot and rainy and others more cool and dry. 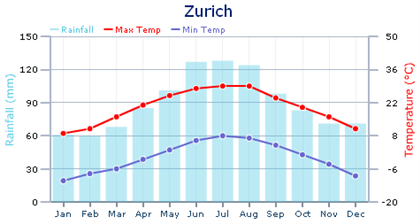 Are you an expat living in Zurich?

Expat Arrivals is looking for locals to contribute to this guide, and answer forum questions from others planning their move to Zurich. Please contact us if you'd like to contribute.