Weather in the Netherlands

The Netherlands has a maritime climate that's fairly similar to England's, with rain throughout the year and variable changes in temperature. Owing to its small size, there's little variation between regions. Expats moving to the Netherlands should invest in a good raincoat and umbrella.

The country experiences mild summers and cool winters, with the average temperatures around 66°F (19°C) in summer from June to August, and 36°F (2°C) in winter from December to February. The flat landscape means that it's quite windy, which is seen in the country's famed windmills. 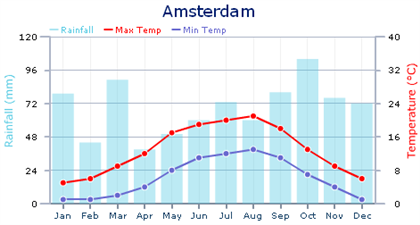