An Englishman in New York

Back in July 2015, at the Frank Recruitment Group summer conference, our director Sean Wadsworth approached me out of the blue and told me I’d be moving to New York to launch our SharePoint contracts team.

I’d lived in London for two and a half years, working the SharePoint contracts market from our office overlooking the Thames. I was a top performer, had set up my own team of 10 people, and had big ambitions – but I hadn’t realised it would lead me to the Big Apple. Here’s what I learned from the experience…

Only worry about the job you have. If you do well the opportunities will come your way. One of the difficulties I had was that the moment the move started to become real, I began to take my foot off the gas in the UK. It took me a couple of weeks to get my head back in the game and then I ended up doing a record deal-month in November just before I moved out to New York.

It’s so important to stay on the task at hand, because up until the day you move you’re still part of your current business and you need to deliver for your managers, team leaders and mentors.

Get your house in order

Once we got out here there were a lot of things we needed to do in the first two weeks. In America you can’t really do anything without a social security number. That takes a few days to arrive. Once you have that you can go and set up a bank account and start the process of getting your own apartment.

One difficulty you will encounter when you come over to the US to work is that you don’t have any credit. There’s a lot of things you take for granted that you can’t get right away – like a cellphone contract – without paying a hefty deposit up front. For example, you have to pay $600 on a contract up front just to pay $70 a month on a phone. One thing you can do is get a pay-as-you-go type deal so you don’t need a deposit – or you could buy a phone outright.

Go back to basics

You can’t underestimate moving to a new country. I thought, 'It’s America, it’s just like England. They speak English, they have similar TV shows, they eat similar food.' But it is a different culture, so it can be a big surprise.

One of the best things for transitioning from the UK to the US was that I was working for the same company. So I was starting from scratch in terms of environment, but the job was exactly the same. My day-to-day job is similar, the targets are the same, the processes that we need to do are the same – it’s just different people in a different country.

The downside to relocating for work in that you don’t know anyone; you have to make friends all over again. Luckily I’ve been welcomed with open arms by my colleagues, and because people ahead of me had already made the transition from London to the US, you’re welcomed into their group of friends too. It doesn’t matter how bad of a day you’re having if you’ve got people around you that you get on with – people you can take your lunch hour with and take a break from the job. The people make the job.

Take up a hobby

Once you get settled, try and get back into your habits. I’ve just signed back up to a rugby team here in New York. It’s so good to finish work at 8pm, go into training at 8.30pm and get that release. Have that bit of normality in your life – you’re not talking about work, you’re away from your mates, and you can just try and get back into a routine. I had my first rugby game last week at Yale University.

It’s the little things about the move that have surprised me. I always thought I’d fully immerse myself in US culture, but I’ve moved out here and I want to find all the British shops, eat all the British food, watch all British TV programmes. I watch football every weekend – so it’s quite funny. I’m trying to immerse myself in the culture step by step. I’ve started to get involved in American sports – I’ve posted my colours to the mast on the Yankees, the Giants, the Knicks and the Rangers.

It was only six weeks ago that it actually really hit me that I lived here. The first three months of moving out here feels like holiday mode – but you’re working. It’s an extended business trip. I didn’t really think about it on an emotional level until a few weeks ago – but it’ll creep up on you eventually.

I’d had a really good week at work. I had a few drinks and was getting an Uber XL taxi home late at night. It was dark outside. We were driving along the highway that surrounds the island of Manhattan, and I could see the whole of the New York skyline, and I suddenly realised that I actually live here. It was absolutely amazing.

I’ve been on a few trips since moving here – I’ve been down to Florida a few times as well as upstate New York. 20 of us hired a lake house for the 4th of July. No matter how many times you drive or fly back into the city, and you see that skyline, it is mind-blowing. I’m a very lucky man. 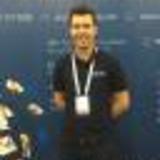