Javier Rodriguez was born and raised in Guatemala, went to college in the United States, and relocated to Ho Chi Minh City, Vietnam, where he’s been teaching English to naughty 5-year-olds, shy 50-year-olds, and everyone in between.  He’s enjoyed travelling in the region, finding the hidden gems in Saigon, learning the Vietnamese language, and writing about his experiences on his blog.

Read more about expat life in Vietnam in our Expat Arrivals country guide to Vietnam. 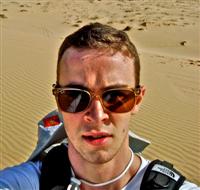 A: I’m living in Ho Chi Minh City (aka Saigon), Vietnam.  I live in District 3, which is only about 5 minutes by motorbike from downtown District 1.

Q: How long you have you lived in Vietnam?

Q: Why did you move to Vietnam; what do you do?

A: I graduated from college in May 2009 without a clear idea of what I wanted to do. I ended up working at an internet start-up in Miami, but after 6 months, I was ready for a change. I had always been interested in teaching, and in travelling around Asia, and I quickly realised both of these could be easily combined. Now I’m teaching English at VUS, a language school with multiple campuses around Ho Chi Minh City.

Q: What do you enjoy most about Ho Chi Minh City, how’s the quality of life?

A: The best thing Ho Chi Minh City has going for itself is the low cost of living. A comfortable quality of life is entirely within reach with even a modest salary. It’s not many places where a 24-year-old can afford to live in a decent house near downtown where a housekeeper helps out three times a week, rent a motorbike to get around, eat out at restaurants almost every meal (or order delivery when I feel like staying at home), get massages every month, etc. I always recognise this is a lifestyle I won’t be able to maintain once I leave Vietnam.

A: My experience living in Ho Chi Minh City has been an interesting ride. There was the honeymoon phase where everything was new and amazing. Then there was an adaptation phase where I had to get used to many of the cultural differences. Learning Vietnamese was an invaluable tool during this time to become better adapted and integrated in this city. Being able to confidently communicate with the locals was a huge help. However, in recent months I’ve ‘relapsed’, and the negative aspects of Ho Chi Minh City are getting to me with an intensity they didn’t have before. Namely, the heat, the incessant noise, the traffic, the poor air quality, things not working out as smoothly as you’d like them to be. It’s imperative to get out of Ho Chi Minh City every 2 months or so to maintain one’s sanity.

A: Yes. It’s definitely not a city where I’m fearing for my safety or having to be overly attentive of my surroundings when I’m in the street (something I’d be dealing with back in Guatemala City). Of course, like with any other city, there are areas you avoid. In Saigon’s case, that would be District 4. I don’t know the specifics, but there’s not much to go see out there anyway, so I simply don’t go. Of the few incidents you do hear about, it’s mainly expat girls getting their purses snatched while they’re on the bike. So I highly recommend either ditching the purse for some kind of small wallet, or always putting the purse in the compartment under the bike’s seat, if it has one.

A: Weekends are my busiest workdays, but if for some miracle I had one entirely off, I’d probably go relax at one of the nice hotel pools (you can buy ‘pool tickets’ which are relatively cheap). In the evening maybe get some cocktails at one of the rooftop bars around District 1 to enjoy the last hours of sunlight, and then go out to dinner at one of the many sushi restaurants in ‘Little Tokyo’ around Le Than Thon Street.

To be honest Ho Chi Minh City does not have the wide selection of activities you might expect of other cities. As a result, people tend to just ‘hang out’ all the time. There is a big café culture in this city. Cafés litter every city street, and they are chock-full of customers at any given hour of the day.

About living in Vietnam

Q: Which are the best places/suburbs to live in Saigon as an expat?

A: As a young adult, I think District 3, District 5, or Binh Than District is the way to go. They are significantly cheaper to live in than District 1, but still close enough to all its restaurants, bars, nightclubs, cinemas, etc.

For older expats or families, it seems the popular options are the ‘An Phu’ neighborhood in District 2, or ‘Phu My Hung’ area in District 7. These are located on the margins of the city, but not far enough to call them suburbs. The drive downtown probably takes less than 25 minutes in either case. Both areas have the advantage of escaping from the hectic chaos that generally characterises life in the other districts. They are also more nicely developed, with wider roads, newer apartment buildings, compounds of nice (and expensive) villas, highly-rated restaurants, shopping, and more.

A: You can basically find whatever you want. There are nice serviced apartments in modern buildings where the monthly rent will make your jaw drop (when compared to what it would cost in other cities). I went with the cheaper option of renting a house with two buddies, and even though it’s less nice than say, a serviced apartment, it’s still comfortable living for an amazing price.

Q: What’s the cost of living in Vietnam compared to home? What is cheap or expensive in particular?

A: Cheap, cheap, cheap. Rent is cheap. Food is cheap. Drinks are cheap. Traveling within the country is cheap. A one-year gym membership is ridiculously cheap. However, anything that is imported is the same price as home, if not more expensive. This includes brand clothing and electronics.

A: Locals in Saigon are for the most part friendly. If you smile at them, chances are they’re going to smile back. However, from what I’ve seen, there isn’t much mixing that goes on. One barrier is the language. Not many Vietnamese speak English, and when they do, the level is very basic, and their accents and pronunciation takes a while to get used to and understand. For the most part, expats mingle with other expats.

A: In my case, it was.  I’ve met the majority of my friends through the school I teach at. The community of young expats here is small, and eventually it seems that everyone knows everybody, or at least you start recognising the same faces when you go out to the same places week after week. I’ve also met other friends through activities such as yoga.

About working in Vietnam

A: I’ve been lucky because my school has handled this entirely for me. However I know of people that go from one 3-month tourist visa to the next, which implies having to leave the country (doing a ‘visa run’) to get the new one. They usually take the bus to Phnom Penh, Cambodia.

Q: What’s the economic climate like in the city? Is there plenty of work?

A: I can only speak with confidence about English teaching jobs, in which case, yes, there are plenty of jobs. There are numerous schools and it seems that anyone arriving here finds a job within a month. For other types of jobs, I would venture to say the situation in similar, since Vietnam is a rapidly growing economy, with most of the action going down in Ho Chi Minh City. However, this will be true of some areas and not of others. I’ve met expats who are working in such areas as finance, banking, international development, or for companies who have a major operation in Vietnam (such as apparel and shoe factories). On the other hand, I’ve heard trades such as advertising, marketing, and graphic design don’t fetch favourable salaries, even for expats.

A: It’s definitely less intense than in the United States.  Everyone takes a nap from around noon to 1pm (lots of places will shut down during this time). I can’t really speak about what work culture is like in a proper company though.

A:  No. I came over here with two suitcases and myself.

A: Get a bike. The freedom of mobility will allow you to really explore the city and find the hidden gems that make living in this city worth it. But make sure to get a face mask or the air pollution and dust might give you a one-month cough like I had when I first got here!