Interview with Juliette Giannesini - A French expat living in Canada 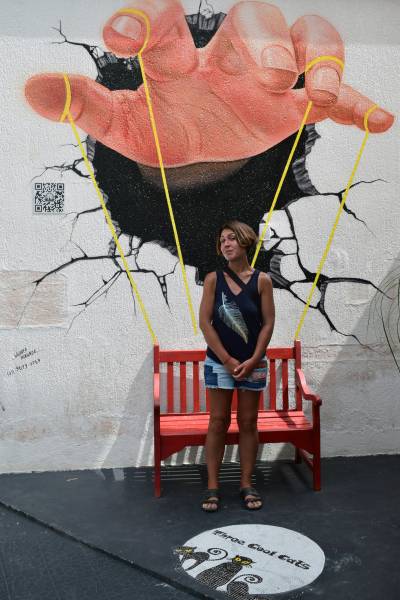 Juliette Giannesini is a French expat living in Ottawa, Canada. Moving alone, she started teaching French as a second language and has now made a name for herself in freelance work. She still can't stand the winters though.

A keen photographer and traveller, you can catch up with her adventures on her website correresmidestino.com.

A: I was born and raised in France.

A: I live in Ottawa, Canada.

Q: When did you move to Canada?

A: I first came in 2002, then went back and forth between France and Canada before getting permanent resident status in 2005. I became a Canadian citizen in 2009.

Q: Did you move to Canada alone or with a spouse/family?

A: I moved alone.

A: I didn’t need a reason to move, I just thought “why not?”! I was in my early twenties and I didn’t have a career plan—or a plan, period. I took a chance on Canada, mostly because it was a country open to new immigrants and I spoke one of the two official languages.

I taught French as a second language for a few years, then I worked as a translator for the federal government. In 2012, I decided to go freelance and I’ve been offering translation, editing and copywriting services to various clients from the public and private sectors since then.

Q: What do you enjoy most about the city? How would you rate the quality of life compared to your home country?

A: Overall, Ottawa is an easy city to live in. It’s safe, clean, family-friendly, and it’s arguably one of the most picturesque cities in Canada. I can’t compare it to France, it’s just different. I do think the job market is better here than in Europe, though, especially if you’re bilingual.

A: I can’t stand winter. You’d think I’d be used to it by now… well, I am, but I still hate it. It’s brutal. It makes life complicated—commuting, wearing layers of clothing, etc. And this season is so long! I miss a true European spring!

People tend to ask me if I miss French food. Honestly, not so much. I enjoy it when I’m in France but I eat differently in Canada, I focus more on world food.

Q: What are the biggest adjustments you had to make when settling into expat life in Canada? Did you experience any particular elements of culture shock?

A: I adapted fairly easily, mostly because I had extensive travel experience (including in more “exotic” countries like China) and because I was a naïve twentysomething. I had just graduated from university and I took my first steps into adulthood in Canada.

Interestingly, I did experience a certain level of culture shock ten years later, when our son was born. Neither my husband nor I grew up in Canada and being a parent in a third culture isn’t easy. What’s “common sense” for a French mother and a Chinese father isn’t for Canadian parents, and vice versa. Childcare, the school system and parenting in general are very cultural.

Q: How would you rate the healthcare in Canada? Have you had any particularly good/bad experiences with regards to doctors and hospitals? Are there any hospitals you would recommend?

A: I have a love-and-hate relationship with the Canadian healthcare system.

On one hand, I’m grateful for the single-payer healthcare system where most of my needs are covered by OHIP, the provincial insurance plan. For instance, I didn’t pay a cent out of pocket for pre- and post-natal care when I had my son. Generally speaking, I trust the system and the quality of care is good.

However, we don’t have enough general practitioners and the walk-in-clinic system is awful. It’s hard to get a prescription for antibiotics (sometimes, you do need them!) and it’s hard to be listened to as a patient.

A: Considering extreme weather conditions and distances, I’d say you do need a car, especially if you have young kids. Public transit is slow, expensive and unreliable once you’re out of the city centre.

About living in Ottawa

A: I do find Canada a bit cheaper than France but expats often argue about this and there is no perfect answer—it depends on your way of life. Generally speaking, wine, dairy products, telco (phone, cable, Internet) and public transit are more expensive than in France. Housing, clothing, utilities are cheaper.

Q: How do you rate the standard of housing in Ottawa? What different options are available for expats?

A: Vancouver and Toronto are the most expensive cities for housing, followed by Montreal and Ottawa. There are many options available—we have enough land!—but it depends on your budget and way of life.

Q: What are the biggest safety issues facing expats living in Canada? Are there any areas expats should avoid?

A: Canada is very safe by world standards and expats are unlikely to be targeted negatively.

A: There is no “expat community” per se in Canada.

A: Canadians are well travelled, open-minded and any kind of discrimination is strongly frowned upon. I love how diverse and accepting our society is.

A: I met most of my existing social circle at work, before I opted for a freelancing career.

A: I live in the English part of Canada and most French move to Montreal. There isn’t a huge French community in Ontario. I never really looked for other expats… I don’t consider myself an expat, I’m an immigrant and I have zero interest in chatting about the “good old days in France.”

That said, most of my friends have an international background and I do know quite a few francophones (from France or other French-speaking countries) through my job as a translator.

About working in Canada

A: I handled the immigration process alone. Canada wasn’t as popular as it is today back then, and the process was straightforward and transparent. I was lucky.

Q: What’s the economic climate like in the Ottawa? Do you have any tips for expats looking to find a job there? Which resources did you find most useful?

A: The federal government is the biggest employer in Ottawa and it’s notoriously hard to land a permanent position, especially as a permanent resident or with a work visa (Canadian citizens have priority). That said, there are many work opportunities with the government for consultants, scientists, etc.

Q: How does the work culture differ from home? Do you have any tips for expats doing business in Canada?

A: Canada is between the US and Europe when it comes to labour laws. It offers better employment protection than in the US (mandatory paid vacation time, maternity leave, unemployment insurance, etc.) but it’s not as generous as many European countries.

A: The positive sides of Canada will depend on your expectations. Overall, I find Canada is an easy country to live in. People are nice, it’s a very steady place, pretty safe by world standards, and we are a good mix of American and European cultures.

► Read more about Canada in the Expat Arrivals Canada guide