Interview with Kevin - An American expat living in Buenos Aires 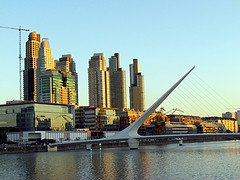 Kevin is an American expat living in Buenos Aires. He spent a year in the city studying abroad and when he left he realised that his time in Buenos Aires wasn't over. He returned a year later and loves the chaotic charm that the city offers.

A: I grew up in a small farm town in central California called Los Banos, I studied in Santa Barbara.

A:  I live in the Abasto neighbourhood of Buenos Aires.

Q: How long you have you lived in Buenos Aires?

A: Three years, four if you count my year studying abroad.

A: I came to Argentina as an exchange student completely on a whim. To fulfil my major I needed to become fluent in one language and Spanish made the most sense. My choices were Barcelona, Spain, which was too expensive; Lima, Peru; Santiago, Chile and Buenos Aires, Argentina.

I chose Buenos Aires because it had the largest population and I thought it had a beach but besides that I knew absolutely nothing about the city. I overstayed my trip by about five months and on the plane back to California I knew my time in Buenos Aires wasn't over, although I couldn't exactly define why. I finished my final year of school, moved home and worked like a dog for about eight months, saved everything up and came back to Buenos Aires.

I came with an internship at a bilingual cultural website, where I served as an intern and was then hired part-time to work as the Assistant Editor and eventually the Managing Editor. After two and half years, I decided to begin my own project. It's a food project called MASA, I host a Mexican-inspired closed-door dinner, pop-ups at a local cultural centre and private caterings.

Q: What do you enjoy most about Buenos Aires, how’s the quality of life?

A: Buenos Aires is a really wonderful place to be young. There aren't really any rules, you can make things up as you go along. It can be frustrating because there are no set guides, but also very freeing. Not that the city doesn't pose challenges, because it can be a challenging place to live at times, but there is a lot less red tape than in the US and so starting your own project (small scale) from the ground up is a lot easier if you have the patience and initiative. It is also a country that is rather homogeneous but has a budding curiosity for foreign culture, so being foreign can be very advantageous in that respect.

A: Buenos Aires is complete chaos, but you get used to it and you grow to kind of cherish it.

What the city lacks is accessibility to culture. If you want to go see a movie or concert, go out for a nice meal, grab a drink, go dancing, it's very costly when you are making money in the local currency. There are very clear social divisions when you go out. You have foreign bands that come and you are going to be paying 250 ARS to see them, if you want to have a good meal out you will be spending about 100 ARS, seeing a movie about 50 ARS, even buying a new book is going to cost you close to 100 ARS. Someone that makes minimum wage is making 1800 ARS a month, so enjoying those sorts of cultural experiences is completely out of the question. And so the evolution of city's culture moves a lot slower than your average metropolitan, which has both good and bad consequences.

A: It really depends on who you are talking to. Turn on the news and all you are going to see is la inseguridad (lack of safety) in the streets. I think it's mostly a media tactic to have people constantly consumed by their personal safety rather than real issues affecting the country. I've been robbed once, but that was for being too trusting of someone that any other human would have pinned as a thief, and once someone tried to pickpocket me on the subway but I CAUGHT HIM and chewed him out in Spanish and it was glorious.

Like any large city crime is an issue, but I think it's generally petty and non-violent. Also, I think in neighbourhoods like San Telmo, Centro, Recoleta and Palermo foreigners are targets because they are easy to spot and less aware of themselves. It's more about walking with confidence, knowing where you are going and obviously not walking around with diamonds on your neck speaking English on your iPhone.

About living in Buenos Aires

Q: Which are the best places/suburbs to live in Buenos Aires as an expat?

A: It really depends on what you are looking for. Someone staying for a short amount of time would probably feel most comfortable in Recoleta or Palermo where you have easy access to the subway, lots of parks, and tons of trendy shops, restaurants and bars.

For someone that wants a more authentic version of Buenos Aires, I think that areas along the B and A subway lines are nice areas to live in: Abasto, Almagro, Villa Crespo, Chacarita, Colegiales and Caballito. They are central and easy to get to and from, not touristy, filled with a lot of hidden fun things, and in the case of Abasto, Almagro and Chacarita, noticeably cheaper.

I live in the Abasto neighbourhood, which is easily one of the most ethnically diverse areas of the city. It was traditionally a Jewish neighbourhood, but now has an equally present Peruvian population, and is also where lots of African immigrants have begun to settle. It's a very unique corner of the city.

A: That can vary greatly based on what you are willing to pay and whether you are signing the standard two year contract or a temporary lease. The important thing, if you want to stay long-term, is if you have a garantia (co-signer). If you want to rent a long-term apartment at a local price it is absolutely necessary to have a co-signer, someone that owns property in Buenos Aires. Without that you will either have to rent a room or go through a company that is going to charge you in US dollars at a substantially higher price.

When you move in somewhere make sure you read and understand the contract, all contracts will stipulate the condition of the apartment, which could say "perfect condition" on the contract even if there are problems, either aesthetic or more serious. Take pictures of any damage and email them to the landlord so you have a dated record of how the apartment was when you got there to avoid issues with getting your deposit back. Also, don't check for rooms or apartments on craigslist, it's filled with vultures. Try compartodepto, mercadolibre, or any other Spanish-language websites or classifieds.

A: Cost of living vs. actual salary ratio isn't very even, and inflation makes everything that much harder. Any electronics, whether it be a laptop or a blender, will be pricey. Although it has gone up in the last year, public transport is very inexpensive. Fresh produce is also consistently affordable. Going out regularly can be difficult unless you have a high paying job.

A: Argentines are friendly, generous, social, opinionated, funny and passionate people. On the other hand, I think Argentines tend to be overly weary of trying new things, non-committal, lazy with work (by US standards) and sometimes a little too blunt or vociferous with their opinions.

My own group of friends is a mixture of Argentines and Americans. I prefer to make Argentine friends mostly because expats come and go so often and saying goodbye to your friends really sucks.

Also I think that two classes of expats exist, no matter what city you choose. There is one group that comes to take advantage of a weak local currency, who scrape by on the language and never take advantage of actually immersing themselves in the experience. They are people who experience Argentina by constantly comparing it to their own country rather than experiencing it for what it is. I cringe when I overhear someone say that "everything is so cheap" because it's really not, or that "the food sucks here" because there are actually a lot of options if you take the time to look for them, or who haven't ever ventured further south of Av. Cordoba except to go see Bomba del Tiempo. My expat friends are people that have lived here for a few years, or at least that have a curiosity for this city, who understand, love and respect this city for the beautiful mess it is.

A: I was fortunate that the second time around I had a good handle of the language and already felt comfortable. I also had two good friends that were really generous with me when I came back and was getting settled in. Argentines are naturally very social people, but keep very tight knit groups of friends that can be hard to become a part of. With some effort, an open attitude and sincerity it's easy to make long lasting friendships.

About working in Buenos Aires

Q: What’s the economic climate like in Buenos Aires, is there plenty of work?

A: Employers paying under the table is a big national issue. Getting a work visa is also difficult because a company or an employer has to sponsor you for a year, and a lot would rather not. For foreigners it can be really difficult to find work outside of teaching English, working for an exchange program, call centre, etc. It's also common if you work independently not to get paid on time, or to be asked to work for little to no money as an "intern" even if you have the responsibilities that a normal employee would have. But as I said earlier, starting your own project is a lot easier to get off the ground here if you have the patience and drive to do it.

A: Everything moves a lot slower. Whether it be finishing a project, arranging a meeting, getting an email response or getting paid, there is never a fixed schedule. The laid back approach can be relaxing but also inefficient and consequently very stressful.

A: Come with an open mind, be patient because nothing is going to go as expected, take it all in, the good, the bad and the completely nonsensical.