Interview with Julia – a Scottish expat living in China

Julia, hailing from Scotland, is a new addition to the expat scene in China. She shares her experiences of what life is like in the Henan Province, as she teaches English there on her gap year. Read about the cultural changes she has had to adjust to, what she enjoys about living in China, and the challenges she has had to face.

A: I'm from a wee town on the east coast of Scotland. 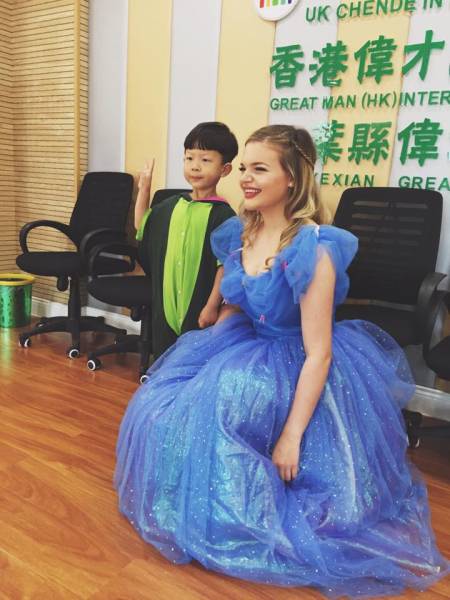 A: I'm living in Henan Province in China, in a town called Yexian.

A: I moved here only four months ago, but have learned and experienced so much since!

A: I moved here alone when I was 18 and celebrated my 19th birthday last month.

A: I moved here to have a gap year whilst teaching English to children before I go to university in September.

Q: What do you enjoy most about China? How would you rate the quality of life compared to Scotland?

A: I am a food lover, so part of me worried that I wouldn't adjust to the Eastern diet. On the contrary, I love it and the variety of different things out there to try – something new every day. The lifestyle is very different however, and it has admittedly taken a bit of getting used to!

A: Simple, but I miss Tetley tea and butter. My mum thought this was rather funny, as China is the homeland of the hot beverage, but there isn't anything quite like a cup of Tetley with a sugar and a splash of milk.

Q: What are the biggest adjustments you had to make when settling into expat life in China? Did you experience any particular elements of culture shock?

A: The language barrier was a huge issue to start with. I am in a part of China not as familiar to the West, in fact I had never heard of it before I was landed with this opportunity. It is not home to many westerners, in fact I am sure I am the only one for miles. This left me a bit lonely at times, and it was sometimes frustrating. Since then, the people I work with have learned more English and I have learned some Mandarin. There are ways around everything.

Q: What’s the cost of living compared to Scotland? What is cheap or expensive in particular?

A: I find certain things are amazingly cheap. Most Chinese people eat out because of this, and I'm rarely over 20 yuan (about 2GBP) for a meal and a drink, and that is sitting in a restaurant. The street food is pennies! I also find trips to the supermarket never leave a hole in my purse, but that's if you stick to local produce. The minute you buy a bar of Galaxy or a tin of Nescafe the number on your receipt rises.

A: As my uncle would say, I kiss the ground every time I get out of a vehicle. I find that anything that travels on a motorway is very chaotic compared to the UK, and there doesn't seem to be much in the way of a highway code and traffic lights seem to be suggestions rather than commands. I have also been stuck in traffic more times here than I have been in my whole life. I took a speed train to Beijing which I found highly enjoyable, however. I don't own a car here and I probably never will. I let more experienced drivers take care of me!

Q: How would you rate the healthcare in China? Have you had any particularly good/bad experiences with regards to doctors and hospitals? Are there any hospitals you would recommend?

A: I haven't yet had to use any health services (touch wood). I did however, discover that painkillers aren't really in existence in China, so I have had to get my mum to send some out to me. We must have such low pain tolerance back home! Either that or they are hiding somewhere and I can't see past the pin-yin (which wouldn't be the first time).

Q: What are the biggest safety issues facing expats living in China? Are there any areas expats should avoid?

A: From what I have experienced so far, in terms of social threats, there don't seem to be any. I believe this is a rather safe place to live, and the rate of crime compared to the USA is very low. China and the USA have the same number of people locked up, but China's population is three times greater. Those numbers speak for themselves.

Q: How do you rate the standard of housing in the city? What different options are available for expats?

A: I haven't seen any houses as such, everyone seems to live in a flat or an apartment in one of China's billions of sky-scraping flat blocks. I think it probably all depends on where you live. I am lucky enough to be in a brand new apartment my school supplied to me.

A: I can only recommend where I am now as it is the only place I have lived. I can suggest that it will be less polluted than the big cities and blue skies make a frequent appearance, something I heard is sometimes unheard of in China. I live about a 20-minute walk from the town centre, and it is bustling and friendly.

A: Chinese people are extremely friendly, but many of them have never seen a Western face, so I get approached a lot and people ask for my photo on many occasions. Apparently the country didn't allow foreigners until the 80s, therefore many of them have only seen a white person on the TV. You might hear them say “laowai” to each other which means "foreigner". This is not discrimination as far as I'm aware, just some friendly curiosity. Usually you can turn their confused frowns upside down if you give them a smile!

A: At first it was hard. Chinese people seem to be endearingly shy, and a lot of the girls I work with knew a lot more English than they first let on. It has been difficult, but there seems to be a mutual understanding that we both struggle with one another's native tongue. It's amazing how you can communicate through humour, body language and even a smile and a “hello”.

A: There are no expat groups in my vicinity, and trust me, I did have a look when the loneliness got the better of me! I think this is a good thing though, as it forces you to fully immerse yourself in the culture.

A: Again, this was all taken care of for me. There was no responsibility on my part to seek out a visa, all I had to do was book my arrival flight to Hong Kong and let my company sort the rest out. Lazy!

Q: What’s the economic climate like in China? Do you have any tips for expats looking to find a job there? Which resources did you find most useful?

A: I understand that TEFL jobs out here are most in-demand. The facilities to speak English are sought after, and I understand that there are posts for these jobs everywhere. The downfall I would say, is that they are not amazingly paid, and that's maybe why they aren’t that popular. I do think, however, that finding a job in China for an expat would probably be easier than in the UK.

Q: How does the work culture differ from the UK? Do you have any tips for expats doing business in China?

A: If you were going to do business, then you would probably need to know the language, if you were in a rural area that is. It’s an extremely hard language, and even if you have mastered speaking it, there is reading and writing in pin-yin which I haven't even attempted in my stay here.

A: I read many books and articles about life in China before I came, in hope that it might prepare me. I don't think anything will prepare you for the culture shock, but I would urge those who find it a bit overwhelming, to stick it out. That way they will get the best from the experience.