Getting a permit to live in Italy – one American's struggle

Since I began the process of getting a permit to live in Italy in 2008, I've often said that the Italians must have invented red tape. Sure, there are difficulties in becoming a legal expat in many countries, and Italy certainly isn't the most challenging, but nonetheless; Italians love their bureaucracy and foreigners not used to this odd romance can often find the relationship extremely frustrating.

Still, this affinity for paperwork doesn't just effect would-be expats, locals have to deal with it, too, which is one reason so much of life takes place under the table in Italy.

Friends who have obtained their work permits – in Italian, these are called permessi – have done so by getting a visa (usually for a year) from the Italian consulate closest to their home and then moving to Italy to go to all the necessary appointments personally.

I'm not yet in a position to move to Italy, so I have a relocation agency based in Milan handling many of the appointments and all of the paperwork for me. It's an expensive option to hire someone to help you, but if you can't physically be in Italy throughout the process it's a recommended one. (If you're lucky enough to be sent to Italy by a company, it's likely they'll have hired a relocation agent to help.)

Italy's immigration laws are very strict, and it's easy to be intimidated. And, yes, the clerk at the questura (the branch of the Italian police department that deals with immigration) could be in a bad mood and reject something for no apparent reason.

But the hard truth is that Italy's immigration laws are not, for the most part, designed to keep out people like me. The laws on the books are there to give the Italian government the ability to send people from places like North Africa and Eastern Europe back to their home countries.

I've been a little nervous at every step in the process thus far, yet deep down I've never been truly worried that anyone behind a desk would say no.

The decision to move to another country is never one to be taken lightly and the best thing you can do for yourself if you think you might want to become an expat is to talk with other people who have made the journey before you. Their experiences will in all likelihood differ from person to person, but there's nothing like hearing the stories of people who have gone through what you're contemplating to give you an indication of whether or not you have the stomach for it.

And if you still want to move forward, keep a copy of that Pausch quote handy. It's been a steady source of encouragement for me. 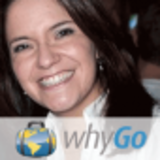