Interview with Patrick - An American expat living in South Korea

Patrick is an English teacher and the owner of JJ’s Bar in Ulsan, South Korea. He has a lovely fiancé named June and a dog named PJ. Both are the centre of his world. He likes to work-out, play guitar, play golf, and meet “weird” people. Patrick has been an expat in South Korea since 2007 and now calls Ulsan home. Follow along with his life on Twitter or see what's happening at JJ's on Instagram. 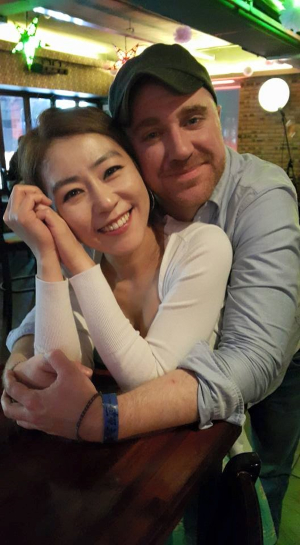 Q: Where are you originally from?
A: Kansas City, Missouri, USA

Q: Where are you currently living?
A:  Ulsan, South Korea

Q: Is this your first expat experience?
A: Yes

Q: Did you move here alone or with a spouse/family?
A:  I moved here on my own.

Q: Why did you move; what do you do?
A:  At the time I was finishing my BS in Broadcast Journalism, and the economy in America had taken a turn for the worse. It was difficult to obtain a job in my desired occupation so I made a living by essentially becoming a freelance bartender. I had my steady restaurant job during the day but at night, I would help bars/convention centres that were hosting special events. On one hand, I really enjoyed my job(s) and was making good money. On the other, working in the bar/restaurant industry is not really conducive for a healthy lifestyle, especially for a 24-year-old. Those who have worked in the industry will understand what I mean. Anyway, a couple of friends with whom I graduated from university were working in South Korea during this time. They had nothing but positive things to say about their experience, so I decided to try it myself.

I work as an ESL teacher and I also own one of the foreigner bars in town – JJ's bar.

Q: What do you enjoy most about Ulsan? How would you rate the quality of life compared to your home country?
A:  The things that I enjoy most about the city I live in are its safety and its sense of community among the expat population.

Q: Any negative experiences? What do you miss most about home?
A:  I have had some experiences with racism. Koreans often associate me with the characters that they see on American television shows and movies. They’re either somewhat frightened or resentful that I’m in “their” country.

Q: What are the biggest adjustments you had to make when settling into expat life here? Did you experience any particular elements of culture shock?
A:  There are definitely cultural adjustments that I needed to make after I moved here but I would consider most of these things to be minute. I’ve found (like most places) that if you’re kind, respectful, keep an open mind, and show up for work on time, it makes it significantly easier to ingratiate yourself into a community.

Q: What’s the cost of living compared to home? Is there anything particularly expensive or particularly cheap in South Korea?
A:  The cost of living in Korea is somewhat cheaper than where I lived in the United States. However, most imported goods are outrageously overpriced. To give an example, a pair of Levi jeans in America costs roughly $40-$50. In Korea, they are well over $100. Also, a large pizza from Pizza Hut can cost upwards to $40 in Korea, but with a coupon, you could get it for less than $15 in America. Essentially, if you want to buy something that is imported or has a “name brand”, you can expect to pay considerably more for it than you would in America. What I’m saying is, don’t anticipate wild and crazy shopping sprees unless it’s at a Daiso.

Q: How would you rate the public transport in Ulsan? What is your most memorable experience of using your city’s transport system?
A: Public transportation, without a doubt, is one of the best things about living in South Korea. Buses, high-speed trains, taxis, and even domestic flights are extremely accessible and fairly priced. The most memorable experience I have with using public transportation is when my friend and I were taking the slow train to a city that was a couple of hours away. When we got off at our destination, my friend realized that he had left his wallet (which contained a large amount of cash and credit cards) on the train. We went to the train station help desk and reported the problem. The person working called the attendant on the train and asked them to look for the wallet. Once she concluded the conversation she reported that they had found my friend’s wallet and the attendant would send it back with the train that was travelling in the opposite direction. My friend had his wallet back within the hour. This likely would have never happened where I come from. Either another passenger or an employee would have stolen it. I hear similar stories from people living in this country all the time.

Q: How would you rate the healthcare in Ulsan? Have you had any particularly good/bad experiences with regards to doctors and hospitals? Are there any hospitals you would recommend?
A: As an American, I’m probably not the right person to answer this question. Even after 12 years of living here, the idea that I can afford a specialist for even the smallest of ailments is still (quite literally) a foreign concept to me. So, yeah, in short, I love the healthcare system in South Korea. I have undergone some minor procedures, but the biggest problem I’ve had centred on communication. That said, most doctors speak a fair amount of English and if they don’t, they will find someone to help translate. There are plenty of specialists that are available in Ulsan but for major issues, there is none better than Ulsan University Hospital.

Q: What are the biggest safety issues facing expats living in South Korea? Are there any areas expats should avoid?
A: To be honest, as a male, I don’t face any safety issues living in this country. The worst thing that has ever happened to me was a taxi driver attempting to take the “long route” to where I wanted to go in order to run up the fare. Women, on the other hand, face more issues. Sexual equality is still an issue in South Korea. Many female friends (including the person that asked me to complete this interview) have experienced objectification and harassment. I definitely don’t want to downplay this issue, but I believe that these problems stem from ignorance which we all know isn’t exclusive to this country. It’s unfortunate that women have to go to such extremes to feel safe, but if they take the same precautions here as they would in their home country, they have nothing to worry about.

Q: How do you rate the standard of housing in Ulsan? What different options are available for expats?
A: Speaking as an American, I think some people might initially be surprised by the size of the housing options here in Ulsan. The most common type of housing is a one-bedroom loft, essentially. The kitchen, bedroom, and living room are all kind of one thing. At first, I was kind of taken aback by this but I ended up loving it. There are other options, of course. Like most things, you pay for what you get. Right now I’m living in a three-bedroom/ two-bath apartment with my fiancé, June. Or should I say, two bedrooms and a man-cave, ammirite boys!? Yeah, no, June uses that room as a personal closet.

Q: Any areas or suburbs you’d recommend for expats to live in?
A: Sam-san, Sung-nam, Mugo-dong, and Oc-dong if you want to be in the thick of it. Dong-gu, Gu-Young, and Eun-Yang if you live a more introverted lifestyle but like to dabble occasionally.

Q: How tolerant are the locals of foreigners? Is there obvious discrimination against any particular groups? Have you ever experienced discrimination in Ulsan?
A: Hm. Like most places, people of colour face more discrimination. Also, being openly homosexual will likely be looked down upon, especially by the older generation of locals. As I said earlier, these problems stem from ignorance and aren’t exclusive to this country. However, things have improved significantly in this area over the 12 years that I’ve been here.

Q: Was meeting people and making friends easy? How did you go about meeting new people?
A: Yes. I opened a bar. Really.

Q: Was getting a work permit or visa a relatively easy process? Did you tackle the visa process yourself, or did you enlist the services of an immigration consultant?
A: As an American, it’s a pain, but worth it, and you only really have to do it once.

Q: What is the economic climate in the city like? Do you have any tips for expats looking to find a job?
A: Getting worse. Especially the ESL market is way oversaturated. Strike while the iron is still hot!

Q: Is there any advice you would like to offer new expat arrivals to Ulsan or South Korea?
A: Come to JJ’s Bar. I’m not joking or self-promoting. When you move to a new country, everything is moving at a million miles an hour, especially your mind. It’s intense. Come to JJ’s, have a drink or two, and let us slow things down for you.