After a terrible breakup, Rianca decided to leave her dead-end job and do what most “youngsters” do: flea to a foreign country. The plan was to stay in South Korea for a year, make some money, and head back home, but she ended up falling in love with the country and staying much longer than expected. She’s now back at home, but missing Korea often. 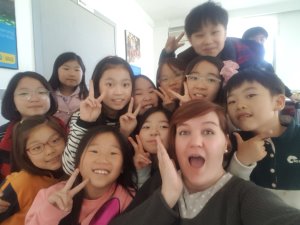 Q: Where are you currently living?
A:  I’m currently back at home after living in Ulsan, South Korea.

Q: Did you move here alone or with a spouse/family?
A:  I moved to South Korea on my own.

Q: Why did you move; what do you do?
A:  I was stuck in a rut at home. I had a tight group of friends who were all starting to move abroad. I heard some really good things about living in South Korea, so I did my TEFL certificate and moved there to teach English in a hagwon (English academy).

Q: What do you enjoy most about Ulsan? How would you rate the quality of life compared to your home country?
A: The thing I enjoyed the most about living in Ulsan and South Korea was the freedom. I could walk around at night without feeling unsafe. I was also earning much more than I was back home so I had much more financial freedom too. It’s hard to compare Korea and South Africa. In terms of safety, access to healthcare, and just general freedom South Korea wins. In terms of people, the environment and space, South Africa wins by far.

Q: Any negative experiences? What do you miss most about home?
A: South Korea has some gender equality issues still. Women aren’t treated as equals yet. Sexual harassment is also a big issue. South Korea also has air pollution problems... And the summers were terrible! The thing I missed the most while living there was just the scenery and friendly people in South Africa. I also really missed proper steaks and Crunchies (a type of chocolate).

Q: What are the biggest adjustments you had to make when settling into expat life here? Did you experience any particular elements of culture shock?
A: The biggest struggle I had was not being able to do things for myself. There’s a massive language barrier when you move to South Korea. My boss basically had to do everything for me in the beginning – from setting up a bank account, getting a cell phone plan, to figuring out the bus routes. You feel pretty powerless in the beginning, but it does get much better once you start finding your feet and settling in a bit.

Q: What’s the cost of living compared to home? Is there anything particularly expensive or particularly cheap in South Korea?
A: If you do a strict comparison, South Korea is much more expensive than South Africa. However, if you’re earning in won, you’ll find the cost of living is pretty good. As an English as a Second Language (ESL) teacher, my employer also paid my accommodation, utilities and half of my healthcare every month. So, you have much more money to spend on yourself. Groceries and alcohol felt really expensive while living there. On the other hand, public transport like the bus and high-speed trains were super affordable. Eating out is also cheaper than buying groceries if you’re a single person.

Q: How would you rate the public transport in Ulsan? What is your most memorable experience of using your city’s transport system?
A: Public transport is amazing. Ulsan has an extensive bus system which takes you all over the city. There are also apps to track the buses with. Taxis are everywhere and easy to hail. Travelling between cities was also easy and affordable. The number of transport options was probably my favourite thing about living here. I didn’t feel like I needed a car once in my whole time living there.

My most memorable experience was the first time I tried taking the bus on my own. It was pouring with rain and the bus was super crowded. I got panicked and got off at a random stop and had no idea where I was. I ended up riding random buses for a few hours crying until I finally saw something I recognized. In the moment I was terrified, but I now know that was the best way to learn the system.

Q: How would you rate the healthcare in Ulsan? Have you had any particularly good/bad experiences with regards to doctors and hospitals? Are there any hospitals you would recommend?
A: Healthcare is exceptional. When you work in South Korea you automatically get enrolled in the public healthcare system. Everything from medicine to consultations are so affordable. It blew my mind.

I came down with a pretty bad stomach bug one weekend. I took a taxi to the nearest hospital and got admitted. The nurses and I had to talk to each other through Google translate, but all the staff were so kind and concerned about me. They took excellent care of me. I was pretty stressed about how much it was going to cost, but after being discharged my bill came to about USD 40 which included everything – even my medicine.

Q: What are the biggest safety issues facing expats living in Ulsan or South Korea? Are there any areas expats should avoid?
A: Like I said, South Korea and Ulsan are both incredibly safe. The biggest concern I would say is for women getting unwanted attention. I have so many friends who were flashed or groped on subways or buses. I myself had to jump out of a taxi once after being touched inappropriately by the driver.

Q: How do you rate the standard of housing in Ulsan? What different options are available for expats?
A: The vast majority of people in South Korea live in apartments. There isn’t really anything unique or fun about housing here. The one plus point about living in Ulsan, is that apartments tend to be a bit bigger than ones you would find in large cities like Seoul.

Q: Any areas or suburbs you’d recommend for expats to live in?
A:  Almost all of the neighbourhoods in Ulsan are good. Typically, expats live in the neighbourhood their job is in. Popular areas include Seongnam-dong and Samsan-dong (the down town areas) and Dong-gu (near the beaches).

Q: Was meeting people and making friends easy? How did you go about meeting new people?
A: The expat community in Ulsan is super tight and very friendly. I found that once you make one friend, it gets much easier. I would recommend going to one of three foreigner bars in town – JJ’s, Sticky Fingers and Cima’s. Going to language exchange meetups are also a popular way of making friends – especially if you want Korean friends.

Q: Have you made friends with locals or do you mix mainly with other expats? What advice would you give to new expats looking to make friends with the locals?
A: In the beginning I mainly had expat friends. However, Koreans (especially those who are keen to practice their English-speaking skills) are super friendly and always trying to make foreigner friends. It really isn’t hard to make friends in Ulsan or South Korea. You just have to put yourself out there.

Q: Was getting a work permit or visa a relatively easy process? Did you tackle the visa process yourself, or did you enlist the services of an immigration consultant?
A: I had to gather a bunch of documents and get them certified. I then couriered those to my employer who applied for my visa. Once they sent me my application number, I went to the Korean embassy near me and submitted it with my passport – three hours later my passport with my work visa was ready to collect. Fast and easy.

Q: What is the economic climate in Ulsan like? Do you have any tips for expats looking to find a job? Which resources did you find most useful?
A: I can really only speak to the ESL market in South Korea. Unfortunately, the ESL market is really saturated at this point. Salaries have been stagnant for quite a while and there are so many young people eager to work there that employees are often seen as dispensable. There are a lot of schools that will try and exploit newbies. That being said, there are also some very good schools out there. Most expats work through recruiting agencies. Pages like Dave’s ESL cafe are useful.

Q: Is there any advice you would like to offer new expat arrivals to Ulsan or South Korea?
A: My advice would be to treat your time in South Korea as an adventure. Push yourself beyond your comfort zone. Eat the food, learn the language, go on all of the trips. South Korea is an amazing country that’ll change your perspective on life completely.

► Read about more about expat experiences in South Korea