Interview with Alessandra Marin - An Italian expat living in Beijing

Alessandra Marin is an Italian expat living in Beijing, China. Alessandra moved to China is August 2010 as a trailing spouse, following her husband who was relocated to Beijing for work. In this interview, Alessandra offers an insight into expat life in China and some of the challenges of being a newcomer in Beijing. 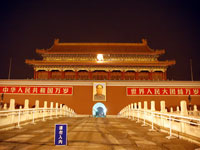 A: I am now an expat living in Beijing, China

Q: When did you move to Beijing?

A:  I moved in China together with my husband and one of my two children

Q: Why did you move; what do you do in China?

A:  We moved to Beijing in order to follow my husband as he was offered a job here.

Q: What do you enjoy most about Beijing , how’s the quality of life?

A:  Beijing has good infrastructures, housing compounds are well equipped with facilities, high standards of international schools and there are a good choice of restaurants and entertainment places.

A:  Beijing is extremely polluted. The language barrier is also a problem. As it takes several years to achieve the fluency, you might end up moving to another country before being able to communicate efficiently in China. As a consequence, there is a lack of interaction between the expat population and the locals, the majority of whom don’t speak a second language. Also Beijing experiences heavy traffic.

Q: Is the Beijing safe? Are there any areas expats should avoid?

A:  The city is relatively safe. However, petty crime and random attacks to foreigners are increasing, mainly due to social inequality. Pay attention if visiting pubs and clubs during late hours, accidents related to excessive alcohol consume often happen.

Q: How would you rate the public transport in Beijing? What are the different options? Do you need to own a car?

A: The subway system  covers only a limited part of the city. Public buses are difficult to access for most expats who are not fluent in Chinese: we don’t know at what time they pass and what are the destinations! As a consequence, most of expats move around using taxis, private cars or company cars with driver. International driving licenses are not recognized, therefore one needs to pass a written exam in order to drive his own car in China.

Q: How would you rate the healthcare in China?

A:  Because of the language barrier public hospitals are difficult to access. Furthermore, they are overcrowded and often they look untidy compared to western standards. In order to find English speaking medical staff, expats need to go to private hospitals and clinics or  seek treatment in the VIP sections located in some of the public hospitals. The cost of medical expenses can be very high and a private insurance is necessary.

Most of ambulances are not equipped with tools for emergency treatment and their number is not sufficient for the need. When possible, it is recommended to take the patient to the hospital using a private car. Western medications are available in private international clinics, but only in some of the pharmacies in town.

About living in Beijing

Q: Which are the best places/suburbs to live in Beijingas an expat?

A:  The majority of international schools are located in the so called Shuny district, next to the international airport, as well as most of the expats housing compounds. I would say that the majority of families with children live in that area. Another option are the apartments of the high rise buildings located is the Central Business District or Sanlitun district.

Q: How do you rate the standard of housing in Beijing?

A:  The standard of housing is good, but prices are high.

Q: What’s the cost of living in Beijing compared to home? What is cheap or expensive in particular?

A:  The cost of living for an expat is at least as expensive as home. Prices are increasing continuously.Things that are cheaper in Beijing than at home include; eating out at local restaurants, taking a taxi, manicures and pedicures, and buying clothing like t-shirts or a pair of tennis shoes.

Q: What are the locals like; do you mix mainly with other expats living in Beijing?

A:  It is quite a closed community amongst the local people in Beijing and the relations with foreigners are often ‘pragmatic’. It means that in general they interact only if there is some kind of ‘business’ involved.

If you are not fluent in Mandarin, you end up mixing mainly with other expats.

Q: Was it easy meeting people and making friends in Beijing?

A:   It was easy to make friends in the housing compound where I am living and through the community of the school attended by my son. There are also international expats associations through where a newcomer can meet people.

About working in Beijing

A:  As an accompanying spouse, there are limitations for me in getting a working visa. The Chinese government in general grants a visa only for working positions that cannot be covered by Chinese staff.

Q: What’s the economic climate like in Beijing, is there plenty of work?

A: There are several work possibilities for professional expats.

Q: How does the work culture in China differ from home?

A:  The difference can be substantial  depending on if you work for a foreign or a Chinese own company. In general the Chinese are attached to work and don't mind working for long hours, but they don’t like to discuss their right for a lunch break,  which should happen between 11.30am and 12.30pm ! Being used to executive hierarchy, the Chinese don’t really use  their own initiative, but prefer to follow a list of given rules.

A:  They partially helped to find a house and to translate the location contract. I learnt everything else through the 'word of mouth'.

Family and children in Beijing

A:  No, we found the house quite comfortable, as well as the working community.

A:  My son loved his new school since the first day, this helped him to settle easily.

Q: What are the schools like, in Beijing any particular suggestions?

A:   There is a good choice of international schools in English, offering the IB or the ‘England and Wales’  program. They are all equipped with excellent facilities and I found the teaching standard outstanding. The other main options for expats are the German and the French schools. Some international schools offer a bilingual program in English and Chinese, but mainly limited to the primary schools. Few Chinese local schools have an International section.

A:  Possibly try to take a basic Chinese course before arrival. Take with you enough clothes and shoes if your size is not a ‘small’!