Interview with Britt – a Dutch expat living in Indonesia

Britt is a Dutch expat who moved to Indonesia to join her Indonesian husband. Six months later, she still loves the food, climate and dynamic culture in Jakarta.

Read more about Indonesia in the Expat Arrivals Indonesia country guide and other expat experiences in Indonesia. 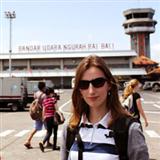 A:  I moved to Jakarta alone, my husband is Indonesian and was already living in Jakarta.

A:  Because of my Indonesian husband.

Q: What do you enjoy most about your host city, how’s the quality of life?

A:  Jakarta is a very dynamic city. It’s almost impossible to get bored in Jakarta. I also love the food and the climate.

A:  Traffic! Jakarta is a very crowded city. I literally spent more hours in traffic in the past six months than in the first 26 years of my life. Getting your visa or visa extension can also be quite frustrating and a work permit in Indonesia is even harder.

A:  Jakarta is a safe city. As long as you don’t go to the most dodgy areas and keep an eye on your purse and wallet in public transportation and some of the low-range and very crowded malls, you will be fine.

About living in Indonesia

Q: Which are the best places/suburbs to live in the city as an expat?

A:  It’s mostly important to live close to your office (and a shopping mall), because of the terrible traffic jam during rush hours. Two popular areas among expats are Kemang (Central Jakarta) and Kuningan (South, Business District).

Q: How do you rate the standard of accommodation in Jakarta?

A:  Good. There are many spacious and well-maintained apartments with good facilities and security available in most areas of the city. Also for expats with a lower budget for accommodation.

Q: What’s the cost of living in Indonesia compared to home? What is cheap or expensive in particular?

A:  The cost of living in Indonesia is lower than in the Netherlands. Local food and transportation are cheap, imported products are expensive (due to high taxes).

A:  Indonesia is one of the largest countries in the world (population of 237 million!) and Jakarta is a mixture of cultures and religions, so there is nothing like ‘the average local’.

A:  It was easy for me, because of my Indonesian husband and family.

About working in Indonesia

A: Unemployment is high and employment in Indonesia is not truly open to expatriates. The government does not want any company here to hire an expat for a job that can be done by a local (because there are so many Indonesians unemployed).

A: I can’t say a lot about work culture in Indonesia since I don’t have a job, but one thing I know is that status is much more important in Indonesia than in The Netherlands.

A:  No, I sold lots of stuff and just needed to bring one big suitcase.

Family and children in Indonesia

Q: How would you rate the healthcare in Jakarta?

A:  Healthcare in Jakarta is good as long as you choose the right hospital and doctor.

A:  Try to learn the language as soon as possible. Not everyone speaks English in Indonesia and you will make friends more easily if you speak the local language.