Interview with Jenni - An Australian expat living in Germany

Jenni is originally from Melbourne, Australia, and has been living and working in Berlin for the past five years. Although Germany is such a huge distance from her home country and family, in this day and age, Skype, email and text message mean that they are never too far away.

Read more about the country in the Expat Arrivals guide to Germany or read more expat experiences in Germany. 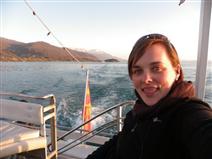 Q: Did you move to Germany with a spouse/children?

A:  I moved after visiting the city in 2004. In Australia, I teach German and ESL (English as a Second Language) at high-school level; in Berlin, I work as a teacher and receptionist at an adult language school.

Q: What do you enjoy most about your Berlin, how’s the quality of life?

A:  There are many, many things I love about Berlin: its location in the heart of Europe, the history, the music scene, the wide range of arts, culture and museums, and the events and places that you would only find in Berlin.

The quality of life is great. Rent and living costs are low, compared both to major German and European cities and to my home city, and wages are reasonable.

A:  The biggest negative for me is the distance from home. It is only possible for me to visit my family in Australia every two or three years, but fortunately we live in the age of Skype, email and text message, and it’s a lot easier to keep in touch with my family now than it would have been twenty or even ten years ago.

A:  Berlin is relatively safe. Some areas of the outer suburbs have a higher concentration of right-wing extremists, and the punks and their dogs in the inner city are best ignored, but if you are aware of what’s going on around you, keep an eye on your valuables and avoid unfamiliar areas at night – as you would in any other major city – you shouldn’t have any problems.

About living in Germany

Q: Which are the best places/suburbs to live in Berlin as an expat?

A:  The most popular are northern Neukölln, Kreuzberg, Friedrichshain, Prenzlauer Berg and Mitte. The first three are the cheapest. Northern Neukölln apparently has the highest number of nationalities represented among its residents of any area of Berlin, and the Turkish population is strongest here and in eastern Kreuzberg. Friedrichshain residents tend to be younger and more alternative; Prenzlauer Berg is renowned for its high concentration of hipsters, young families and its café scene; Mitte is similar in some areas. The western suburbs don’t tend to be as popular with expats. Dahlem and Zehlendorf in the southwest are Berlin’s most affluent suburbs, and most of Berlin’s international schools are in this area.

Q: How do you rate the standard of accommodation in Berlin?

A:  Generally accommodation quality is good. Most Berlin residents live in apartments; you will only find houses with gardens in the outer suburbs and in the affluent southwest. One or two bedroom apartments are common, but share flats are equally popular in Berlin – they are known as WGs (Wohngemeinschaft), and can house as few as two or as many as ten or more residents, most of whom are strangers to each other when they first move in, unlike in Australia and other countries.

Q: What’s the cost of living in Germany compared to home? What is cheap or expensive in particular?

A:  Compared to Melbourne, Berlin is cheap. Rent, food, entertainment and transport are all significantly less expensive, and this continues to contribute to my decision to stay in Berlin.

A:  I mix with both Germans and expats. I work with both, I live with one of each, and I have a mixed social network.

Q: Was it easy meeting people and making friends in Germany?

A:  I met almost all of my expat friends and several German friends through current and previous employers. University was also a fantastic place to meet people, and most of my German friends are people I met while studying. It can be difficult to make German friends, even being fluent in the language, since in my experience many Germans tend to have a small, closed circle of friends they socialise with regularly which can be difficult to break into, but it is possible.

About working in Germany

Q: Did you have a problem getting a work visa/permit for Germany?

A:  When I first arrived in Germany, I worked for a year in a teaching exchange program which organised my visa. When my visa ran out, I applied for and received the twelve month “Work and Travel” visa available to Australian citizens, and soon after I was offered a position at a language school in Berlin. Most language schools in Berlin only offer freelance hours, but my employer offered me a permanent contract, and by the time my visa came up for renewal, they were prepared to sponsor me. I have since successfully renewed my visa twice, I recently received an unlimited work permit, which removes almost all work restrictions, and next year I can apply for permanent residency.

On the whole, dealing with immigration in Germany can be daunting. Ask around for advice, do your homework on your visa requirements, make sure you have all of the paperwork they will ask for, and reserve an appointment at their offices well in advance of your visa’s expiration date. The process is a lot less scary if you are organised, know the system and have the funds or the contacts to get yourself a good interpreter, or speak enough German to not need one.

Q: What’s the economic climate like in Germany; is there plenty of work?

A: There is work, but a lot of it is part-time or freelance. I was extremely lucky to be offered the position and the contract I have. As an English teacher, having an education degree rather than just a CELTA/TESOL/TEFL certification made a big difference. Other work is available, for example tour guiding, or working in a bar or restaurant, but hospitality work usually requires knowledge of German.

Having the right visa for your job is critical. Freelance visas can be hard to get, so many in Berlin work in bars and restaurants without the right permit; if caught there are hefty consequences for you and your employer.

Q: How does the work culture in Germany differ from home?

A:  My employer is unique in Germany, in that my workplace is deliberately similar to an American, Australian or British company in terms of formality in dress code and in communication. Students and staff address each other informally, using “du” instead of the formal “Sie”, and communicate as much as possible in English; both of these attributes are unusual for a German employer.

Q: How would you rate the healthcare in Germany?

A:  Fortunately I have never had to use the German healthcare system for more than the occasional winter cold, but from what I have heard from others, it is reasonable, especially compared to what is available or standard in other expats’ home countries.

A: My only advice is to do your best to learn German or improve on your existing skills. Compared to many other languages, it is relatively easy to learn, especially from an English native speaker’s perspective, and even more so when living in the country. English and German are linguistic first cousins and while the grammar can be difficult, in my opinion English speakers have no excuse not to have at least a basic level of German in Berlin, and I can promise that the more German you learn, the more you will enjoy your time here.

Are you an expat living in Germany? We'd love to hear your story. Open the questionnaire here, copy into an email and send it back to info@expatarrivals.com