Interview with Lara – a South African expat in Australia

Six years ago, Lara Davis left Cape Town, South Africa, for another vibrant coastal city – Gold Coast.  She has proceeded to fully immerse herself in the sunshine and hustle of one of Australia's most beautiful places. Lara talks to Expat Arrivals about working, studying and navigating expat life in Gold Coast, Australia. 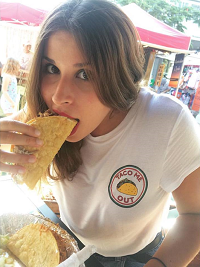 Q: Where are you originally from?
A: Cape Town, South Africa

Q: Where are you living now?
A: Gold Coast, Queensland, Australia

Q: Did you move here alone or with a spouse/family?
A: I moved here alone

Q: Why did you move; what do you do?
A: Although I moved here alone, my ex-boyfriend (an Australian) was from here, and I moved here to be with him. Currently, I’m a part-time worker in a restaurant and a full-time University student.

Q: What do you enjoy most about the Gold Coast? How would you rate the quality of life compared to South Africa?
A: The quality of life here is better than I could possibly imagine. If you’re smart with your money, it’s very easy to save money quickly and work 20-25 hours a week and still be able to live within your means with some money to spare. The Gold Coast has a city, the beach and a rainforest all within 30 minutes of each other, so you get the best of all worlds.

Q: Any negatives? What do you miss most about South Africa?
A: As much as I love Australia, it will never really feel like my home. I’m quite independent, so I don’t feel myself missing family that much, although I do miss the culture in South Africa. I generally have more confidence there and feel more comfortable back in South Africa.

Q: What are the biggest adjustments you had to make when settling into expat life on the Gold Coast? Did you experience any particular elements of culture shock?
A: The Westernised culture is quite the same, although, particularly on the Gold Coast and the Sunshine Coast (where I lived before), there is a strong emphasis on image. The people my age (25) are extremely concerned with their image, and going to the gym, along with plastic surgery. This was quite a shock to what I’m used to, which is a more relaxed approach to image.

Q: What’s the cost of living compared to South Africa? What is cheap or expensive in particular?
A: Although it does seem more expensive to live here, the minimum wage is a lot higher here and it’s easy to live within my means. In South Africa, minimum wage was impossible to live on. I previously lived in the UK and it was the same (as I lived in London), I had to work two jobs to get by. Now I work one part-time job and live well within my means.

Q: How would you rate the public transport in Gold Coast? What are the different options? Do you need to own a car?
A: I live in the suburbs, so public transport isn’t great. In cities like Brisbane and Sydney, the public transport is great, however the Gold Coast isn’t as populated. There are buses, though unreliable, and not all services run at night. I would definitely struggle if I didn’t have a car. However I would consider selling my car if I were to move to a bigger city.

Q: How would you rate the healthcare in Australia? Have you had any particularly good/bad experiences with regards to doctors and hospitals? Are there any hospitals you would recommend?
A: I’ve never had to attend a hospital in Australia, however doctors can be quite expensive. I get Medicare which cuts your doctors bill in half, this is useful; however for long appointments you can still be paying $70 for half an hour. Some doctors I’ve found rush you through the appointment, which can be stressful, however it’s trial and error to find a good doctor that genuinely cares for your wellbeing.

Q: What are the biggest safety issues facing expats living in Australia? Are there any areas expats should avoid?
A: Some areas nearly everyone should avoid, like any country. Particularly some suburbs in Sydney. With regards to the Gold Coast, there aren’t really any particularly dangerous areas. The closer to the city (Surfers Paradise/Broadbeach), the more dangerous it gets (particularly weekend nights), however it is very safe compared to South Africa.

Q: How do you rate the standard of housing in the city? What different options are available for expats?
A: The best way to find housing is to rent a furnished room straight away. Living in hostels can be great, especially to make friends, but they’re so expensive and will drain your funds extremely quickly. It might be risky, but finding a room in a suitable location, with suitable transport and no lease/6 month lease, will always be the cheapest option.

Q: Any areas/suburbs you’d recommend for expats to live in?
A: Depending what you’re looking for, I love Brisbane for the art and music scene. I’d recommend areas like Toowong, Indooroopilly or any suburbs within a 10km radius of the city. When it comes to Gold Coast, a lot of expats live in Broadbeach/Surfers Paradise as that’s where they’d be likely to find work.

Q: Was it easy meeting people and making friends in Gold Coast? How did you go about meeting new people?
A: I’ve generally always been bad at making friends, but once you put yourself out there it’s quite easy. If you’re proactive about it, you can make friends easily through work, studies or exercise clubs.

Q: Have you made friends with Australians or do you mix mainly with other expats? What advice would you give to new expats looking to make friends? Any social/expat groups you can recommend?
A: I mainly mix with locals, but that’s just who I’ve encountered more through work and studies. I’m not aware of any expat groups on the Gold Coast, however.

Q: Did you have a problem getting a visa or work permit? Did you tackle the visa process yourself or did you enlist the services of an immigration consultant?
A: I initially entered on a working holiday visa. Although coming from South Africa, I needed to get an X-ray, which was quite a hassle. However, this was only due to where I was from and isn’t a requirement for everyone. The visa was approved in less than a week, and although my mom helped me with it, the process was very easy.

Q: What’s the economic climate like in the city? Do you have any tips for expats looking to find a job there? Which resources did you find most useful?
A: There’s a lot of growth on the Gold Coast and a large tourism industry; however, because of this there is a lot of competition for workers. The best way to go about it is to hand out resumes in person and apply through Gumtree, as this is where employers who want part time/hospitality workers will advertise. I’ve found they’re also more open about hiring expats.

Q: How does the work culture differ from South Africa? Do you have any tips for expats doing business in Australia?
A: Australia is known for its employers treating employees badly, and I have experienced this first hand. However, this isn’t the case for everyone, like anything there are always a few bad eggs out there. As soon as you start working, you should start saving money, and it can help you avoid any bad eggs you may encounter.

Q: Is there any other advice you would like to offer new expat arrivals in Australia?
A: Start applying for work as soon as you get here. Make friends with other expats and anyone else - networking is also important for finding work. Save money, don’t enter romantic relationships (this complicates leaving) and don’t have a set plan. Things happen that are out of control, and while it’s good to have a rough plan, don’t follow it word for word.